WE ARE OPEN. READ ABOUT OUR CURRENT ORDERING AND INVENTORY STATUS HERE.

The Wabi Thunder is a versatile build that can go Urban or Cross/Gravel.  Using our Thunder frameset and wheelset, it takes wide tires (up to 50mm), lots of fender/rack options and a serious beating--all at under 20 lbs.

The new Fall colors are Liquid Clay, a dark glossy warm gray, and Glass Gray, a glossy medium gray with a hint of green. Custom colors are also an option below (with the $250 upgrade included). Images provided are mockups and final color may vary slightly.

Get the latest here on lead times for builds and when we'll get new inventory.

PART NOTE: We've combined the product page for the Urban Thunder and Cross. Find options specific to each model in the dropdown menus. We are out of our CX/Urban wheelset so can only offer the build with a tubeless compatible Velocity A23 wheelsets (similar specs to our stock set but with nicer rims)  as a $60 upgrade.

The Wabi Urban/Cross Thunder features a hand-built, TIG-welded, Reynolds 725 frame, along with a great component group. All bearings are sealed—a low-maintenance relationship is guaranteed. Just keep air in the tires and a little lube on the chain. And ride!

For custom colors, see our topic on how to choose a color. Put your color choice in your checkout comments.

Looking to customize gearing or a brake or crankset upgrade? Contact us at support@wabicycles. We have SRAM, Sugino and Miche options available.

We highly recommend review our sizing page before purchasing. We recommend looking at both your height and your actual inseam / standover height. The guide below can also provide some general guidelines.

Check out our FAQ/Knowledge Base for most questions.

Assembly. Note that our bikes come 90%+ assembled and most customers can do the final assembly themselves. This saves you the time and cost of taking the bike to a bike shop for assembly.

Upgrade options explained. This will help explain the upgrades in the dropdown menus and well as other options that are not on the menu. I purchased a Wabi Thunder frameset and built it up with fairly good quality parts in hopes of making a great all-road bicycle. Overall, I ended up with a bicycle that is definitely “really good” but not quite great - let me explain. I ride this bike as a fixed gear, and I ride 700x43c Gravelkings... because of the somewhat steep head angle, there is significant toe overlap on this bike. On the road I don’t mind toe overlap at all, but on low speed trails or really tight/technical turns where you may have to turn the front wheel a bunch you simply can’t. If I set the bike up as a single speed then it won’t be an issue, I’ll just position the cranks to have my feet avoid contact with the tire. That’s literally my only major complaint with this bike. EVERYTHING else is well thought out, and despite the classic road bike front end geometry this bike is stable and accurate on any surface that resembles a road (paved, dirt, gravel etc.). The frame is downright lively to me, but I’m a 190lb sprinter with very powerful legs... small riders may not find the ride quite as lively. For those who prefer to spec and build their own bikes, you’ll love that everything is common and normal on this frame (27.2 seatpost, normal 120mm rear spacing, 68mm English BB, 1-1/8” threadless with external headset cups). The cable stops are well placed, the barrel adjuster on the seat stays is a nice touch and overall it’s just a nice bike for riding, working on or just looking at it. Hey Wabi, if you decide to revise this frame and give it a 71.5° head angle and build it with lugs I’ll gladly be the first to buy one! One last thing - this bike is a great value! The quality in workmanship is as expected at the price point, but the quality in material they use and the ride characteristics are well above anything else at this price. I may swallow my pride and put a White Industries freewheel on this bike, as that would solve the low speed maneuvering issue and give me a bike I could confidently ride almost anywhere

I bought a Wabi to have it as an ultimate commuter for my 20 mile cycle to work and back in London. The Urban Classic has got clearance for bouncy 35mm tyres and mudguards. I also fitted a rear basket on. The bike rides really well it's a lot of fun to ride. It was a defiantly a big decision to get a bike all the way from the US but in

Have had the bike for about 3 months and I probably have about 1200 miles on the bike, with a long ride of 66 miles including several 2000 ft climbs in the San Francisco bay area. My other bike is a Cannondale Supersix with 105 components (the wabi is a similar weight even with 38mm touring tires) This is my first single speed bike. The wabi Urban Classic has really changed the way I ride not only because of the single speed but mostly because of the wider tires. I have done multiple gravel trails and some small jumps in a BMX park with my son. If I put an easier gear on the bike I could even do light mountain biking with no problems. I did several 2000ft in the bay area which was maybe a little too tough for the gearing I had (46x19) 66 gear inches (I have had to get off my bike once...It was a 20% slope for about 35 yards that you can't really get any speed into) Great things about this bike- -Seems like a very good value for money... it is similar to the surly steamroller but probably a better frame and has even more tire clearance ( I plan on putting wider tires and fenders on my bike this fall) -Wide tires, I didn't realize how awesome it is to run wide tires, I can drop my pressures down to like 30 psi and ride gravel, I don't have to pump up my tires before every ride, traction is incredible which improves braking and cornering, tires will probably last longer, I no longer dodge all of the road cracks, It is more comfortable. -Very strong bike...I don't really have concerns about broken spokes with such a high spoke count, I think the only way I would be stranded is if I broke a chain -pretty cheap replacement parts the parts are high enough quality that upgrading wouldn't help the bike much but would be pretty cheap to replace if they fail Bad things about the bike- -brake hoods were put on the handlebars too high so that the brakes can't be reached from the drops...I will change this when I change the handlebar tape, so not the biggest deal. -The paint job is so shiny you can see all the dust and dirt on the bike... I can really tell when I have ridden on gravel. (this is probably a good thing if you clean your bike alot, but I don't wash my bike after every ride) Maybe in the future wabi might consider some less glossy paint jobs for the wider tire models -Headwinds are sometimes really hard without gears, on a single speed you want to stand up when pedaling gets harder, but if you stand up in a 20mph headwind the pedaling gets even more difficult -a few adjustments like brake toe in needed to be done at home to stop brakes from squealing, not a problem just might discourage new bike owners -I no longer ride my cannondale... I feel a little sorry for it ...poor poor bike :( Overall I think all of wabi's bikes hit a sweet spot in cost and quality... The Urban is the perfect bike for flat to rolling terrain, pavement or gravel, most people probably won't want to ride up mountains on this bike but it did fine for me. For most people it is probably the best bike wabi offers On a side note, many bike makers are now putting disc brakes on road bikes... which I think for bike owners just adds lots of weight and complexity, I can stop faster on these cantilever brakes than a modern race bike with disc brakes, this has nothing to do with braking power, but is the additional traction I get from wide tires run at lower pressures. 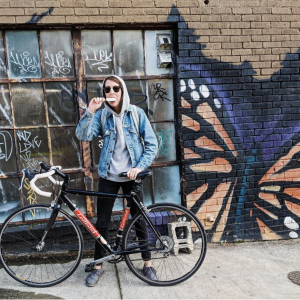 The Wabi Urban Classic is my dream bike! Thanks to the Wabi team for all your help during the ordering process. Fantastic bike. Fantastic customer service.

Last year my husband and i bought a brace of matching classics. We have loved riding these bikes! This year we decided to stretch our game with a pair of Thunders with 40 wide tires! We rode them along a washed out road along the mighty Elwha River valley and was that a blast! These bikes are so special in their simplicity, quality and lightweight strength. The WABI team is always a pleasure to work with. I do not see another product with more to offer and customization anywhere close to this price point. Great job again, and thank you! Patty